Queen Rearing should be standard practice for any beekeeper with a couple of seasons experience. Relying on imported queens to requeen your colonies could spread exotic pests and diseases into the UK and provide you with bees that have poor local adaptation.

The only reason you should purchase queens from outside of your area is to bring in characteristics that your bees don’t have, like a gentle temperament or reduced swarming instinct. Most likely, if you breed from your best colony each season, you will soon have bees that suit your purposes, and you can proudly distribute spare queens to your beekeeping neighbours.

Keeping good hive notes will help you keep track of your best colonies, you should record:

The most common months for queen rearing are May, June and July as the weather is more reliable, however, you can start queen rearing any time there is capped drone brood in your healthy colonies. The queens will mate with drones from other hives, preferably those not related to them. If you have capped drones in your hives, you can be sure your neighbouring beekeepers do as well!

Gather your equipment well in advance so you are not rushing to get everything ready at the last minute.

There are many methods of queen rearing, the Miller Method requires very little additional equipment and no grafting, so it is easy for a first attempt, many beekeepers use this, or their own version of it, as their preferred queen rearing method. Do not be disheartened if you are not successful at your first attempt. There are many variables. Try again and perfect your own queen breeding method.

This method should give you an average of 5 queen cells, but up to 15 have been known.

Preparing the Miller Frame You will need: A Brood Frame, either fully or part drawn and a pair of wire cutters. Or An empty Brood Frame, and a sheet of unwired foundation. Place the drawn comb brood frame on a cutting board and, using a sharp craft knife, cut the comb length-ways, halfway up from the bottom bar in a Zig Zag pattern, using the Wire Cutters to snip the wires in the foundation.

Place the drawn comb brood frame on a cutting board and, using a sharp craft knife, cut the comb length-ways, halfway up from the bottom bar in a Zig Zag pattern, using the Wire Cutters to snip the wires in the foundation.

Or - Place the sheet of foundation on a cutting board and cut out 3 pennant shapes, making sure the pointed end of the pennant shape is cut so the hexagonal cells are the right way for the bees (pointed corners up and down, not the flat sides)

Using a little melted wax to help fix the pennants in place, fix the foundation pieces to the top part of the frame. Pin in the wedge piece of the top bar to secure the foundation in place. They will still be a little fragile, so will need careful handling. 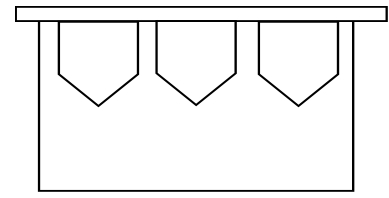 Placing the Miller Frame in the Breeder Hive

Re-organize the breeder hive, Make a space in the centre of the colony for the Miller Frame. If a frame of stores is taken out to accommodate the Miller Frame, freeze it for later use in the queen raising nucs. Place brood combs either side of the Miller Frame containing lots of eggs and young larvae. Make sure there are plenty of pollen stores in the hive and feed with weak sugar syrup or commercially prepared syrup. 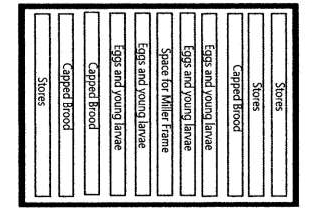 The queen should quickly lay in the drawn comb, but it may take an extra day or two for foundation to be drawn. With drawn comb, check after 3 days, with foundation check after 4-5 days. Harvest the frame once there are eggs laid in the lower part of the Miller frame. The rest of the timings will be judged from the day of harvesting this Frame.

Open up the breeder hive colony and check on the Miller Frame, there should be lots of eggs. If you are not great at seeing eggs, take a magnifying glass with you. Once you are sure there are plenty of eggs laid in the frame. Replace the frame of eggs in the breeder hive and put the hive back together until the afternoon.

Now set up the Cell Builder hive ready to take the cells in the afternoon. The receiving brood box will need to have been queenless for several hours before transferring the eggs. 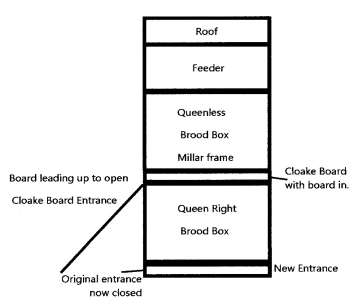 Place a frame of foundation at the edge of the brood nest in the Breeder Hive, to replace the Miller Frame. This hive can be managed as normal for the rest of the season.

The Breeder Hive can be used again for breeding in a later part of the season. Many queen breeders like to rear queens in July, so they have fresh young queens to requeen hives ready for the winter.

Two days after the Miller Frame was Harvested

10 or 11 Days after the Miller frame was harvested

Cells are best moved into Queen Raising Nucs on day 14 of the queen’s development from egg to adult. If you wait too long, the queens will start to emerge and the Virgin Queen will fight or leave in cast swarms, if you move them too early, you risk damaging the queen development and the resulting queens will be less able to mate and thrive.

If you are using your Cell Builder colony, make up the nucs as instructed above, placing the old queen in one of the nuc hives. Place the nucs in a circle around the original hive location and face the entrances inward, the flying bees will find their way to one or other of the nucs.

Cut generously around the queen cells so you don’t risk damaging the queen within, and you have a wide top to anchor the queen cell within your nuc. Handle your cells carefully, the developing queen can be easily damaged. 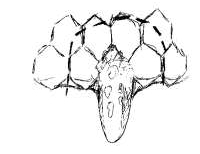 The Association's apiary in North Shropshire

The Association maintains an apiary at an organic farm in North Shropshire. We hold regular meetings at the apiary during the summer, where members old and new can gain experience in handling bees.

We encourage and develop
the art and science of bee keeping

We strive to educate
Through group meetings, practical out apiary events and educational support

The Copyright © of all material on this site belongs to the NSBKA and or its respective author or creator.

Our website uses cookies, which are bits of data that your web browser will place on your device for us. The NSBKA website requires cookies to allow parts of our site to function properly, they are used for authentication, navigation, and some other functions. If your web browser does not accept our cookies then some parts of the site may not function properly, and you will not be able to stay logged in as we use the authentication cookie method. By using the NSBKA website, you agree to allow us to place these types of cookies on your device.